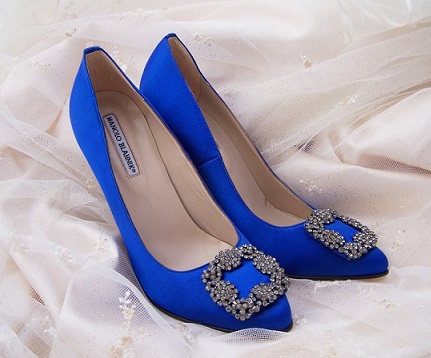 Top Spanish Shoe designer, MANOLO BLAHNIK has built a loyal following thanks to his remarkable shoe designs, one of which is the classic Blue Satin HANGISI Pumps which was first featured in the 2008 romantic sitcom Sex and the City, where it was worn by renowned actress Sarah Jessica Parker who played the role of Carrie Bradshaw.

After that movie, the HANGISI Pumps became “top rack” in demand and of course because it’s “Manolo’s”, not everyone could afford it at $965. Well here’s some interesting news I found: Different designers began creating budget friendly replicas of that same shoe, tagging it different names under their brands.

So first it was Martinez Valero (shop Martinez ) who made an identical pair and named it the “zenith shoe” which actually did describe the demand of the shoe at that time: HIGH POINT! LOL Well his was sold at $159.99! You can imagine the price margin!

Next was RSVP (shop RSVP) which came up with not just one but TWO alternatives to the beloved MANOLO‘s HANGISI Pumps. The first was not so identical, but just similar due its blue satin fabric. It was named the “Zaza” Blue Satin Pumps and it sold for $99! And the second was the RSVP “Sincere” Satin Pumps (yea…sincere indeed!) which looked a bit more like it but with lower heels. They sure meant business with this one, as they made it in four(4) different colors which sold for $79 each. Way cheaper but of course still of very good quality. But wait; did RSVP plan on wrecking Manolo or what? just thinking out loud

And coming right behind RSVP was NINA (shop NINA) with the “Bonique” Buckle Satin Pumps. I think this is even prettier than Manolo’s, and more importantly, less expensive at $49.99! hahaha

And the list goes on and on and on… and so far, eight(8) more shoe brands have successfully copied MANOLO‘s Blue Satin HANGISI Pumps‘ design by creating identical, similar and alternative pairs, and selling them at almost giveaway prices compared to his, not of course excluding SJP (by Sarah Jessica Parker) remember her? LOL! Well who wants to lose out in the biz of the season? Certainly not Sarah!

Although not as exquisite as MANOLO‘s, it’s still a pretty good alternative.

I hear our two(2) most affordable options are currently unavailable, but I luckily stumbled upon three(3) not-so-far substitutes which are still within the same price range.

Yea, I know it’s not exactly like the rest, but we can make do with this, can’t we? 🙂 (at least it’s made of satin like Manolo’s).

It’s obviously not made of satin, but it’s still simple and beautiful, isn’t it?

I totally love this one ‘cos it’s pure cobalt blue, made of velvet (not so common material with shoes) and the heel is just as high as the one before this (yes! I love high heels!)

If you ask me, I wouldn’t say those other shoe brands did anything really wrong in creating more budget-friendly versions of MANOLO‘s Blue Satin Hangisi Pumps in order to make it more affordable and available for the more cost sensitive group of people in the society. In my opinion, it’s actually of more integrity to make a similar version of another designer’s work and tag it under your own brand name (at least we know what you’re up to), than creating a fake (low quality) of it and downplaying the other designer’s hard work by maintaining his/her brand name, and probably even mis-spelling it in the process (Malono Blankik/Christina Loubouteni) *lmao! We know those guys who are famous for doing such, yea? 😉

So let’s not crucify these brands in our minds for trying to help out. ‘Cos let’s be honest, only a minute percentage of the population of our various countries can afford to count a whooping sum of $965 to buy a pair of shoes. At least before we can afford to (which we will someday), we can still “rock-the-look” with more affordable options.

As an aside, just for future purposes, here’s how to spot an authentic MANOLO BLAHNIK pair of shoes (How to identify genuine MANOLOs)

So there you have it ladies! Ensure not to miss out in the “blue” parade this summer! /=D

Let’s all have a restful and refreshing Sunday evening!