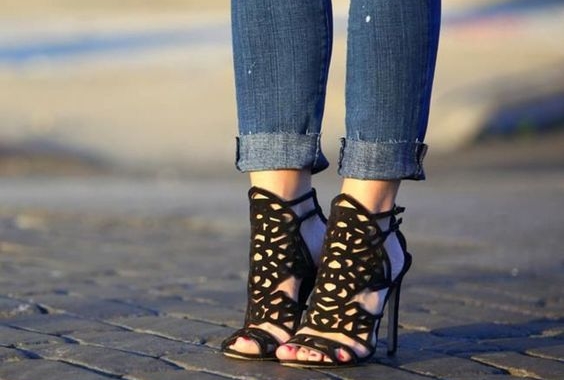 Hope you’ve had a lovely week thus far. Mine hasn’t been bad at all; just a bit of pressure here and there, but we’re good 🙂 .

In my recent observations, there’ve been multiple appearances of a certain trend in shoe designs hitting it real hard on the runways of some major shoe lines this season. They are LASER CUTOUTS. Now just in case you’re wondering what I mean by laser cutouts, I’d gladly break it down for you.

First, you should understand what a laser is. In word description, LASER is an acronym for Light Amplification by Stimulated Emission of Radiation. Lasers are amazing light beams powerful enough to zoom miles into the sky or cut through lumps of metal. Although they seem pretty recent inventions, they’ve actually been with us over half a century: the theory was figured out in 1958; the first practical laser was built in 1960. At that time, lasers were thrilling examples of cutting-edge science: secret agent 007, James Bond, was almost chopped in half by a laser beam in the 1964 film Goldfinger. But apart from Bond villains, no one else had any idea what to do with lasers; famously, they were described as “a solution looking for a problem.” Today, we all have lasers in our homes (in CD and DVD players), in our offices (in laser printers), and in the stores where we shop (in barcode scanners). Our clothes are cut with lasers, we fix our eyesight with them, and we send and receive emails over the Internet with signals that lasers fire down fiber-optic cables. Whether we realize it or not, all of us use lasers all day long. There are basically three types of laser cutters, but the one specifically used in designing leather and other shoe fabrics is the CO2 laser cutter: You could click here to learn more about it.

So when it comes to foot-wears, Laser Cutouts are usually shoes whose fabrics were designed using CO2 laser cutters to give them clearly defined and consistent design patterns. And yes; with the intention of giving you that super shoe-power feel once your feet are slipped into them! We’ve got quite a number of them to look through (and shop for) together, so fasten your belts as we go Lasering Up!

And oh, just as a side spice, you’ll also be seeing some Steal Deal Alerts on this post too! So don’t stop reading till you get to the foot of this page 😉

It’s a Charlotte Russe Symmetric Laser Cutout T-Strap Sandal. Other than the fact that this cobalt blue stiletto is a sure show-stopper, it also looks a lot like the Giuseppe Zanotti’s Caged ‘Raquel’ Sandals which John Legend’s wife; Chrissy Teigen, wore to the 2016 NAACP Image Awards held at the Pasadena Civic Auditorium, California:

Steal-Deal Charlotte Russe! Gotcha! 😉 But well…what can I say? * LOL* . Get the Charlotte Russe’s version here at $20! (yea, now you get why I had nothing to say. Such an irresistible deal!).

Now this, is where we take the laser cutout trend a step further! Talk about sophistication and style – When I found this beautiful pump of exquisite craftmanship in Choies‘ shoe gallery, I had to zoom in on it to get a closer look at its detailing. This has a totally distinct design pattern; its carefully traced scalloped edges and laser cutouts which appear like writings of some strange language. Well whatever language that is, I’m more than ready to learn! * LOL *.

But….  *yea that “but” *, this shoe seems to be a steal deal of Christian Louboutin‘s Impera Lace-Up Lasercut Stiletto Pumps, which has been spotted on a couple of famous feet i.e Nicki Minaj, Florence Welch, Rocsi Diaz,
Rihanna and Nina Dobrev. Here’s what Loub’s version looks like:

I must confess; Choies did a pretty decent job with the replica: Similar laser cuts, the gorge’ lace-ups, the pointy-toes and stilettos. But you know what they say: “Like” Loubs ain’t Loubs. 😉 .  Don’t get me wrong: I’m not a fan of copied work, but Christian Louboutin’s version (while still in stock) costed a whooping $1295! So I think any legit high-street brand who’s willing to design and make available something similar at a more affordable price for the “other half” of the population, without of course impersonating the original brand, should be totally acceptable. Well yes, Choies’ can pass as one budget friendly alternative, so click here  to get yours.

Ankle booties are fast becoming must-haves for every shoe lover who wouldn’t risk being left behind by the trends of this fast-paced industry called fashion. I love how its criss-crossed laces are actually what hold and close up the laser-cut vamps, adding quite some sexiness to the pair. With it’s contemporary beat, this GOJANE Lattice Lace-Up Booties are fast leaving trails of fabulousness behind. But wait, I’ve got something to show you:

Yes! Exactly what you thought! Well these are STEVE MADDEN‘s MADDYE Wrap Lace-Up Booties, which are just like GoJane’s! At first when I saw them, I had to check properly to be sure one wasn’t selling for the other, but lo and behold, they are identical shoes by different brands! The only noticeable differences are the wrap vamp which Steve Madden’s has but GoJane’s doesn’t, and the side zip detailing which GoJane’s possesses but is absent on Steve Madden’s. I have no idea who copied who but all I know is that they both look Hawt ‘n’ Fabulous! And one juicy info you might want to have: Go Jane’s costs over a hundred dollars less than Steve Madden’s: You know what that means right? 😉

Here’s a Tan Laser Cutout Cone Heeled Sandal from the stable of a not so famous but certainly creative shoe-brand: DELICIOUS. Although not as flashy as many others, its meticulously slit horizontal design pattern, bold metal buckle and comfy double-tone heel which blends thoroughly with its vamp, has earned this piece a place amongst the gorgeous ones! Well Delicious obviously isn’t the only one thinking of placement in the fab league, as I also came across a sandal which looks way too alike as this to be a mere coincidence. Here it is:

For the records, this isn’t exactly a laser cutout sandal: It’s more like a cagey, woven strapped one. I bet I’m not the only one seeing the similarity between Delicious’ Tan Sandal and this JustFab‘s GWYN Coffee Brown Sandal which looks pretty chic. In this case, I’m wondering who copied who since both are by regular high street brands. Nevertheless, I’ll still keep my eyes open and my ears to the ground for steal deal alerts on these. And in spite of the similarities, if I were asked to pick one, I sure would opt for JustFab‘s GWYN instead of Fabulous‘ Tan Laser Cutout. No offence Fabulous, but I think JustFab’s looks more mature and ..* whispering * …of  better quality. Or what do you think ladies? Who’s on my side???

NEW LOOK did justice to the laser cut trend with this Wine Red Suedette Bootie, and added an extra girlie touch to it with the flowery cutout patterns. It’s so pretty. Some Shoe-Hotness this is! Now guess who else is playing a similar ball with peep-toe laser cutout booties?

It’s MADISON babe! Now they’ve got me totally hooked on this! Madison gave a twist to the trans-seasonal bootie trend with this Pink Heart-Shaped Laser Cutout Ultra-Glam piece. If Laser Cutouts haven’t been on your fashion radar yet, I think this Madison’s Monica Sandal would sure get you considering! No word yet on who copied who, but both New Look and Madison have obviously got us covered on the laser trend this season!

On to more laser stuff!

The laser cutout show wouldn’t be over without QUPID causing a stir on the runways. The ever-reliable high street brand has turned up with this fascinating spider web-like, diamond-shaped laser cutout design. I personally love snake skin fabrics; which is a plus for Qupid‘s ARA-71 Dress Sandal, coupled with the blue-black-grey mixture which lifts this lush piece a step higher in my imaginary rack of must-have shoes! Well I found some extra info about this footwear though: Ummm… seems like Qupid did copy someone’s design.

Ever heard of SCHUTZ shoes? Well that’s whose design Qupid replicated. Let me show you:

Schutz’s is called the Juliana Sandal but gosh they look so identical! You would hardly be able to spot the difference once they’re worn, except when they’ve been taken off then you could tell by the brand logos. Schutz did set the pace for quite a number of other shoe brands to follow, as Steve Madden, Breckelles, Charlotte Russe and Missguided have also made replicas of the same sandal. You could click them to compare prices and in the end, make a wise selection 😉

And the last but certainly not the least…

Hmmm… these two graphic laser cutout heels look very alike. Why? ‘Cos someone copied someone. Let’s find out who!

On the left is GIUSEPPE ZANOTTI‘s TATTOO 16 Sandal from his New Season Collection of lust-worthy shoes, and on the right is one of MISSGUIDED‘s beautifully crafted eclectic foot candies. So I’ll leave this to you: In your opinion, who do you think copied the other? You could click on each of them, look through their profiles and hit me up in the comments section with your guess 🙂 * I have a feeling you can already tell who did the copying by their names * Lmao!

Thanks for stopping-by. See you in the comments section! 🙂