0
Home
/
Celebrity Shoe-Crush
/
Dark and Lovely – Not the hair relaxer! 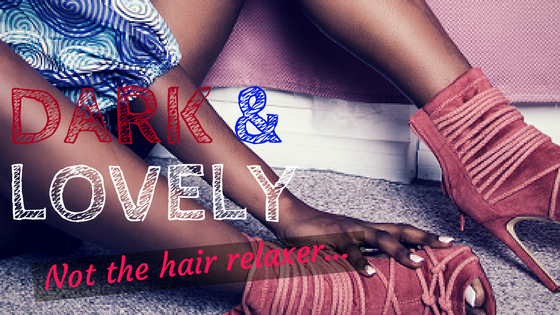 #BlackGirlsRock ain’t no cliché hashtag or phrase… Naaah. It’s quite a glaring reality; undeniable even on the global front. Decades not too far gone held terrible stereotypes of not just blacks, but its women as well; tagging them with really outrageous names which I would rather not mention. Many of those had close connections with historical events over which these adorable women had little or no control over 🙁 …

The “stereotypers” turned distraught when all of a sudden right before their very eyes, African Womanhood gradually broke out of the stereotypical archetypes and images which they had oh-so-well carved, into a rather formidable force to reckon with.

Well over a week ago, I was looking through our Twitter followers to see what new stuff they had going on, when I stumbled upon what I’d call a “Melanin Treasure”. A black (glaringly black) lady, who in somewhat of a twinkle of an eye, stepped into the global entertainment scene with such desirable poise and carriage, which has since left all gaping in wonder. She’s smart, talented, skilled and radiantly African. Wondering who deserves all those enviable adjectives we just used? Let’s save you the numerous guesses. Here she is! 😀

She’s no other than LUPITA NYONG’O: The Kenyan-Mexican beauty who since her feature film debut in 2013, has had the carpets lit and won the hearts of many all over the globe with her beautiful smile, her boatload of talent and her passionate heart for humanitarian service. Such an inspirational icon to black females all over 🙂 .

Now back to what we found about Lupita on Twitter…

Although we are still digging to find out who the creative designer for this outfit is, we are quite certain the photograph was taken on the same day as the Academy Awards; thanks to her hair-do which gave us just the clue trail we needed. Our Melanin Diva dazzled in this lush piece of clothing, leaving us literally gaping at her adorable photo and taking in every inch of pride, dignity and beauty which she exuded.

But looking towards the lower part of the photo, we observed that the photograph was almost a half length, hence we didn’t get to see the exact footwear with which she complimented the outfit 😥 ; so painful! But then, this got our style wits ticklish and ruminating over various footwear options which could serve as the most deserving to take a seat right beneath the gorgeous dress in which Lupita so effortlessly slayed. Well you know we never disappoint (uhn-hun 😉 ), so we dug and dug, and yep! We did find, not just one (1), but three (3) perfect blends for the themed dress. Ready to see? Let’s take a dip!

With the gold detailing on her dress, we thought a bit of matching, glittery straps on her feet would add a pop to the ensemble, each time the footwear steals a peep from below the dress; as we imagine this dress to be a full-length, flowy one. Nothing too loud; just really stunning in a subtle way 😉 . Loving the combo? Then get it here for just NGN9,000 to attempt this style!

If you know us, then you’d know we love to give’em a bit of a throw-off-balance, too often to be described as occasionally 😀 . So how about we try something a bit unexpected? Check this out:

So before you go all “what the h***!”, here’s what we think: How about we attempted this dress in a straight/pencil cut, three quarter length style, with a slit behind? Then add this ravishing piece as the icing on the cake? 😀 You get the idea right? Exactly! Now this particular footwear costs a bit higher than the usual average price of footwears we bring you: It’s NGN21,500, but you know that feeling you get when everyone’s stare is right on your feet the exact instant you step into a room? Now that’s the magic which this piece would create for you. So set the pace by getting it here, then get your fashion designer on the grind for the dress.

Still on the three-quarter fantasy, we found yet another beautiful piece which would do a splendid job at spicing up the rather enticing outfit. Here’s our final show stopper:

Silver has timelessly been attributed the characteristic of adding a girly and fascinating touch to any outfit; especially when there’s been a deliberate pairing on the styler’s part. With its classic yet sophisticated feel, this piece by Ana Michelle would at a moderate cost of NGN9,000, adorn your feet to precision as you create your very own Lupita- inspired dinner look. The most fantastic part of the pair is that it would go perfectly with the classic flowy evening dress or our fantasy straight cut, three-quarter dress. Picturing it already? Then grab it here to set your blaze on.

P.S.- So about the dress, just in case you’re like me who’s still “growing up” 😉 hence may not be able to afford the Mai Atafo’s, the Deola Sagoe’s or the April by Kunbi’s, I’ve got great news for you darl: We discovered two amazing fashion designers who would do an equally great job at pulling off the design either identically or even in a more stunning style! So simply chat either of them up via Whatsapp or give them a direct phone call by clicking on any of their names as follows: StyledbyDonita and Oriaku Fashion.

Okay babe, gotta go now. Thanks a lot for the read (mmmwa!)

We look forward to seeing all your comments below; including the rib-cracking ones 😀 .

Short Poem by Us:

I love my melanin.

I love my history.

I see my future.

It’s brighter than the tone of my skin!

There are no comments